Prices continued to plunge in April 2018, with the front month contract briefly tumbling below the 12.00 USD c/lb on 10 April 2018, hitting its lowest level since September 2015. Since hitting these record lows, the Sugar No. 11 May 2018 contract traded sideways averaging 12.08 USD c/lb. Increases in Indian and Thai production along with the announcement of India’s export quota of 2 mmt for the 2017/2018 season were the main drivers of the price plummet. Persistent speculative selling, coupled with producers pricing at lower levels also contributed to the lower price levels.

The amount of sugarcane crushed in CS Brazil during the 2017/2018 season decreased by 1.8% year on year coming in at 596.31 mmt. Despite the decrease in sugarcane crushed, sugar output was at 36.05 mmt up 1.21% on the year. The increase in sugar output was due to the increase in ATR (total recoverable sugar), which was at its highest since the 2011/2012 season. The ATR for the 2017/2018 season came in at 136.6 kg/mt increasing by 2.6% against the 2016/2017 season. According to UNICA, Hydrous ethanol output was up 4.5 % on the year, coming in at 15.7 billion litres in the 2017-2018 season. The higher ethanol prices in raw sugar equivalent and greater demand at the pumps were highlighted as the reason for the increase in the ethanol production. 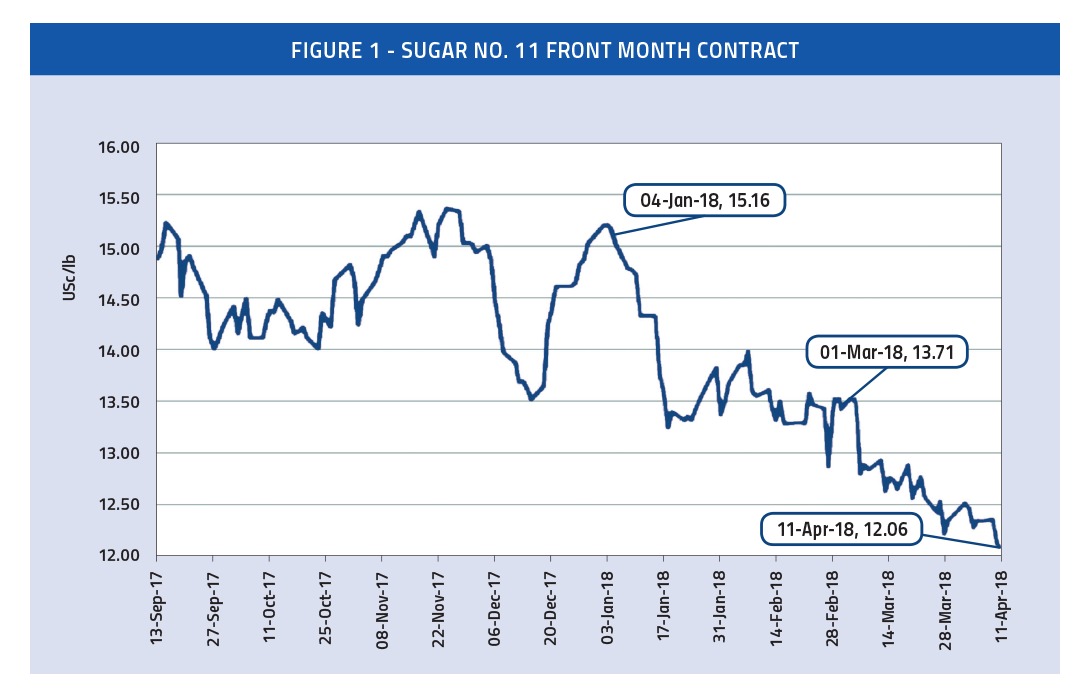 Latest Kingsman reports estimates 2018/2019 CS Brazil production to amount to 584 mmt tons with the ATR remaining at similar levels to those experienced in the 2017/2018 season. It is expected that the ethanol mix will increase to 58% in the 2018/2019 season which is supported by ethanol’s higher premiums to sugar, and greater demands at the pump. The new supply of the 2018/2019 season has pressured the ethanol prices in CS Brazil. The surge in volumes in the first weeks of the new season saw the price decline sharply from 15.99 c/lb (sugar equivalent) in the start of April to current levels of 14.39 c/lb (sugar equivalent). The magnitude of the decline did surprise the market, which did not anticipate such a steep decrease in such an early stage of the season, given the ongoing strength in demand and overall tight stocks experienced at the end of 2017/2018 season.

The Indian government on 28 March 2018 ratified a scheme allowing the export mmt tons of raws/ whites by allocating a Minimum Indicative Export Quota for all 555 domestic mills. The government also removed the 20% export duty on all sugars which allowed the export price to move closer to the world price. Production for 2017/2018 season thus far has totalled 28.2 mmt tons which is a 45% year on year increase. The production states of Maharashtra and Uttar Pradesh have been largely responsible for the surge in output. Private Indian weather forecaster Skymet has recently forecast “Normal” South-West monsoon in June to September which could result in the 2018/2019 crop heading in the same direction as the 2017/2018 crop. Kingsman estimates the 2018/2019 production to total 32.02 mmt which would see a 6% increase against the latest 2017/2018 estimate of 30.2 mmt. Kingsman also estimate closing stocks to rise from 3.5 mmt- 4 mmt in 2016/2017 season to 8 mmt at the end of 2017/2018 and to an astounding 14.4 mmt during the 2018/2019 season, excluding any exports.

According to data released by the Office of the Cane and Sugar Board, production in Thailand during the period December 17- 31 March 18 was recorded at 9.8 mmt, which was a massive 31% year on year increase. Favourable weather conditions and improved yields have contributed to the increase. This season’s raw/white sugar mix was 75/25 as compared with 70/30 mix last season. Assuming normal weather conditions, Thailand could also see a strong crop for the 2018/2019 season, however it remains to be seen whether farmers will switch some of their acreage away from cane next year if final cane prices for 2017/2018 season are lower on the year. Kingsman have estimated a cane crush of anywhere between 125 mmt and 130 mmt with sugar production in the region of 13 mmt – 13.5 mmt. Export availability is expected to be significant, within the region of 10 mmt.

China has been inducing bearish sentiment on the world market in the past three seasons with import volumes declining sharply despite a constant structural deficit within the range of 4.7 mmt and 6.2 mmt. From a peak of 4.26 mmt of raws imported in 2014/2015 seasons, volumes have decreased to 1.8 mmt tons over the past two seasons. Imports of whites have increased slightly during this period from 1.68 mmt in 2014/2015 to 2.1 mmt in the 2017/2018 season. Kingsman attributes the increase in whites to higher levels of smuggling. One of the key questions on most people’s minds is the expected outlook for the 2018/2019 season, Kinsman’s expects a drop in the smuggling of white imports due to increased government campaigns and controls on smuggling. It is also expected that Automatic Import Licenses issued by government are generally increasing as world prices look set to stay at lower levels. Raw volumes are expected to increase from 1.82 mmt in 2017/2018 to 2.05 mmt in 2018/2019, while imports of whites are expected to total 2.02 mmt of which 1.53 mmt will be smuggled.

Taking a look at the European market, beet sowing has experienced heavy delays due to adverse weather conditions. Above average rainfall over the recent weeks resulting in swamped fields coupled with cold weather in most key regions are the main factors behind the delay. France, Germany and the Netherlands have all experienced major delays when compared to the sowing figures posted last season. Such planting delays at this stage of the season have been raising fears that this could impact final yields.

In conclusion, the outlook for the sugar market remains bearish, as the pending surplus expands and creeps closer. The looming surplus in sugar supply globally has resulted in higher pricing for further out contracts, paying producers to carry sugar. The October 2018 contract currently pays 12.49 USc/lb, with March 2019 at 13.68 USc/lb, against the front month May 2018 at 12.17 USc/lb.

Geran Ranganthan
is the Export Administration Manager at SASA