The front month contract, May 2019, has traded in an extremely tight range between 12.84 US c/lb and 12.29 US c/lb during the first two weeks of April. The contract has recently traded close to the upper end of the range, closing at 12.81 US c/lb on 10 April 2019. This represents an increase in value of 39 points when compared to the previous week’s close of 12.42 US c/lb.

Taking a longer view on the May 19 values, the contract has gained in excess of 60 points since the lows of 12.14 US c/lb posted on 7 March 2019. The recent appreciation in value (even though limited) can be attributed to the following: 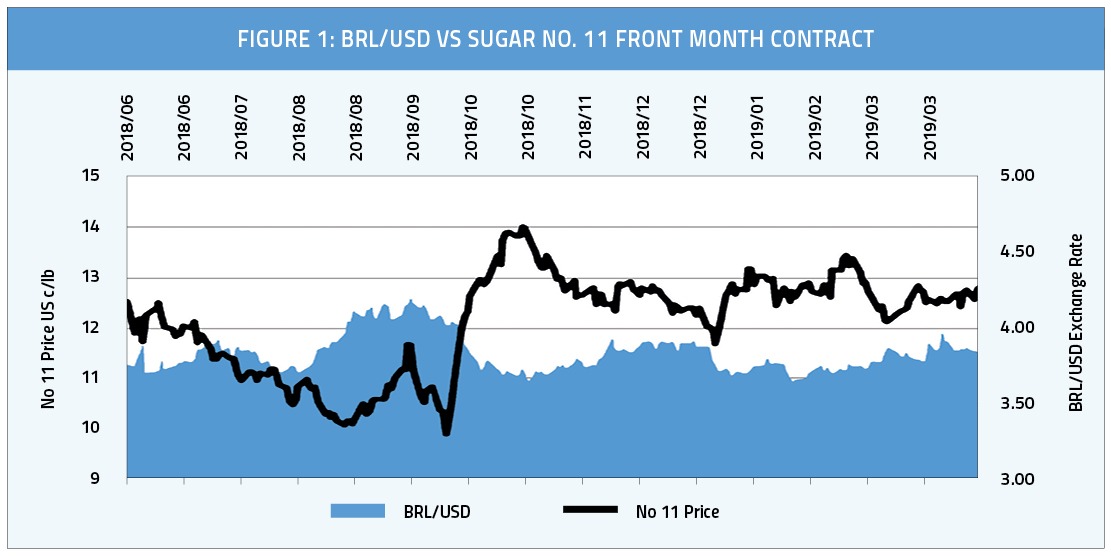 While the No 11 New York prices have traded within a range, the No 5 London price has experienced a sharp depreciation in value. This has resulted in a collapse in the white premium. The current May white premium has trading below 50 USD per ton since 4 April 2019, closing at 44.3 USD per ton on 10 April 2019. According to Kingsman, at these low levels, refiners’ demand for raws should slow down.

One of the reasons for the depreciation in the white market has been the influx of Low Quality Whites from India. These Indian sugars have displaced refined sugars in the UAE and Africa. There has also been a slowdown in demand in traditional white markets such as Myanmar, Taiwan and Vietnam, which has also impacted prices.

Exports out of India has slowed down during the past few weeks due to the increase in the minimum sale price of sugar at the factory gate, however stock levels have been growing at an unprecedented pace during this time period. According to LMC, unless India experience a weather intervention which would drastically reduce the size of their 2019/2020 crop, their stock situation will reach unsustainable levels. While their ethanol program can absorb some of the sugar, it will not be sufficient to solve the stock situation that faces them. In order to keep the domestic price at current levels, the logical solution would be more exports. 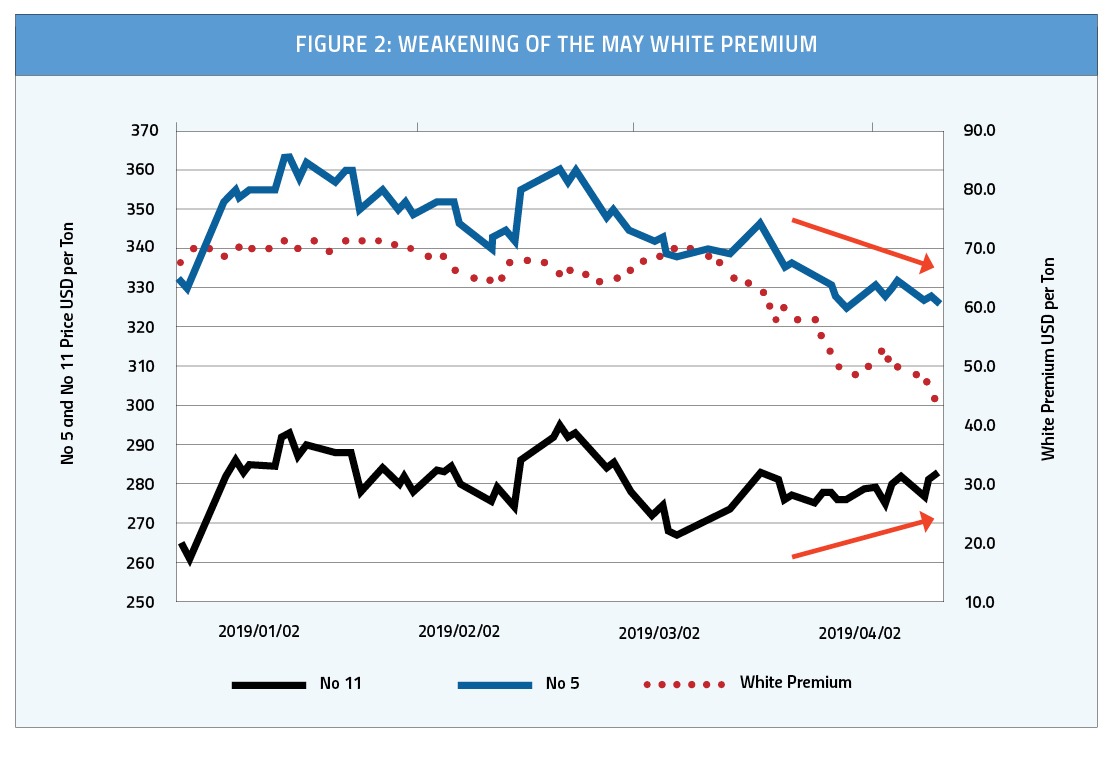 With elections set to take place in the coming months, there is also uncertainty on government policy going forward. If current policy is seen as ineffective, the world market can be faced with a scenario of depressed local prices in India due to the massive stock levels. This spells bad news for the world market, as this makes exports the only option to eliminate the high stock levels in India while maintaining a reasonable local price. It seems that the world market continues to be at the mercy of the Indians.

Thailand have focused heavily on raw sugar production for the 2018/2019 season. According to LMC, as of 19 March 2019, Thailand has produced 9.7 mmt of raws compared to 8.4 mmt at the same point last season. During the same period, refined production declined to 2.6 mmt from 2.4 mmt in the previous years. The reduction in refined sugar can be attributed to reduced demand from China, as well as other historic destinations such as Myanmar, Taiwan, and Vietnam. While the market expects Thailand to remelt some of their raws into refined, the extent will depend largely on Chinese demand.

According to a recent report from Czarnikow, sugar consumption in China is facing the threat of decreased demand. While sweetener consumption in China will continue to grow due to population increase and growth in the Chinese economy, an increase in sugar consumption will face strong resistance in the form of HFCS substitution and the growth of imported foods. According to Czarnikow, HFCS production, increased by 660 000 mt from 2018 while exports reduced by approximately 244 000 mt. Despite the increase in supply, the price of HFCS remained stable, which is a strong indication of increasing domestic demand for HFCS and the switch from sugar.

Despite signs of decreased sugar consumption in China, LMC are of the view that China may need to import 4.2 mmt of sugar between April and September 2019, to ensure their stock position remain in balance at the end of September 2019. LMC are of the view that the current world price and the steady domestic price, could lead to the release of Automatic Import License. 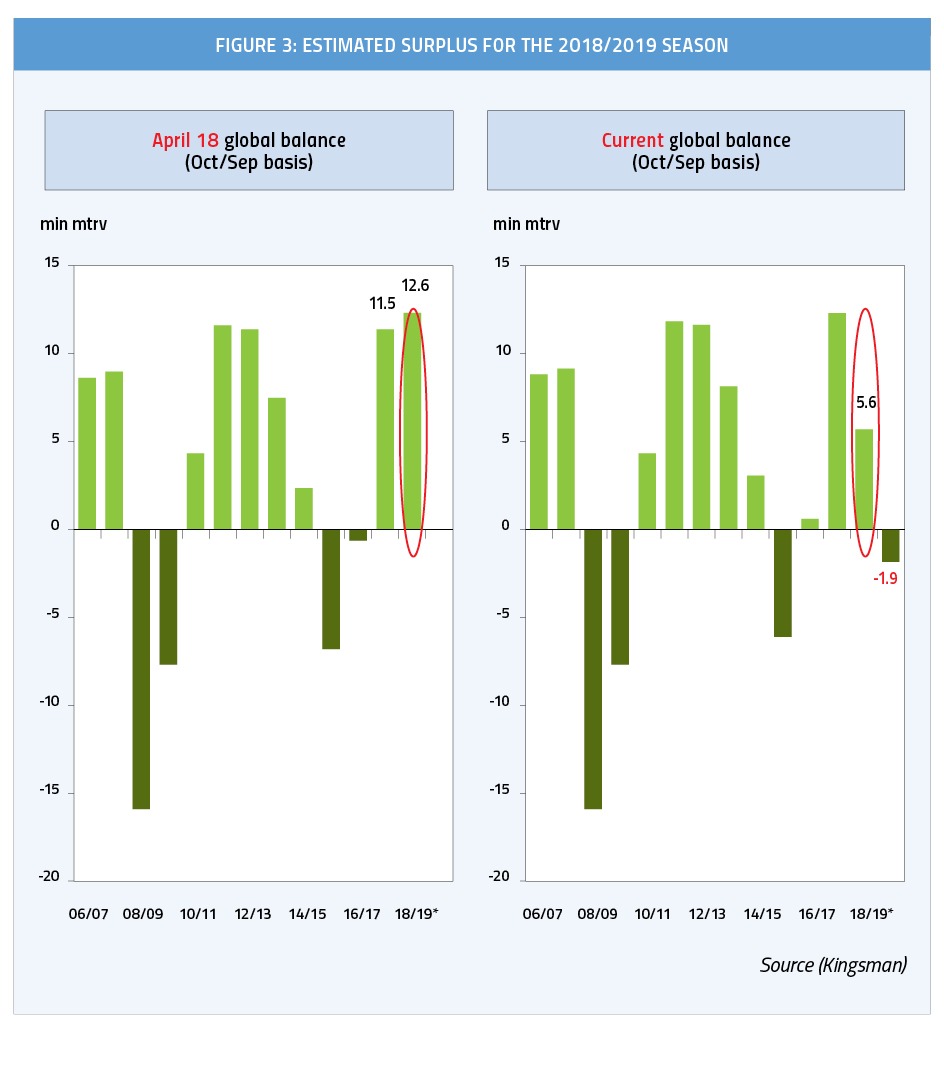 Analysing the trade flows for 2019/2020 season, Kingsman’s has projected a deficit of 1.93 mmt tons. Marex Spectron has also suggested a deficit year of production for the 2019/2020 season but their number is slightly higher than that of Kingsman. Marex Spectron has based their deficit of 2.75 mmt on lower production out of India, due to lower acreage in Maharashtra as well as higher diversions to ethanol. Marex expects production in Thailand to drop by as much as 10%. This is due to the drier than average conditions, as well as a switch to more attractive crops such as cassava.

Despite a projected deficit for the 2019/2020 season, the world sugar market will face high levels of uncertainty. The following scenarios outline the uncertainty in the market:

If we were to add the unpredictability of the speculators into the equation, the world sugar market is set for a highly volatile roller coaster in the short to medium term. Current market conditions point to more upside potential than downside risk in the short to medium term. There is however, strong indications that the market will find a hard cap in prices upward of 13.50 US c/lb in the form of Brazilians increasing their sugar mix at these levels, as well as Thailand increasing their raw supply if the white values do not improve.

Geran Ranganthan is the Export Administration Manager at SASA