CARBON TAX
ON THE HORIZON

South African carbon tax policy and framework initiated by the Department of Environmental Affairs (DEA) and National Treasury (NT) has been developed along the polluter pays principle as expressed in the National Climate Change Response Policy (NCCRP) of 2011.

Government has indicated that the forthcoming carbon tax aims to play a role in achieving the objectives set out in the NCCRP of 2011 contributing towards meeting South Africa’s commitments to reduce greenhouse gas (GHG) emissions by encouraging companies to gradually change their fuel inputs, production techniques and processes through investments in energy efficient, low carbon technologies to lower their GHG emissions.

The carbon tax policy process originated after the Tax Policy Unit of the National Treasury initiated a study on the potential for environmental fiscal reform in South Africa in 2002, resulting in the Environmental Fiscal Reform Policy Paper in 2006. This study then triggered a series of discussion and policy papers which has framed the approach taken in the Revised Draft Carbon Tax Bill published in December 2017. This included the Carbon Tax Discussion Paper (Dec 2010), National Climate Change Response White Paper (2011), the Carbon Tax Policy Paper (May 2013), the Carbon Offsets Paper (April 2014), and Draft Carbon Tax Bill and Draft Regulations on Carbon Offset (2015-16).

All entities that generate emissions from energy combustion will qualify for a basic, tax-free allowance of 60%.

GHG emissions from chemical processes that occur in fixed stoichiometric ratios (e.g. coal gasification, crude oil cracking and the production of cement, iron, steel, glass, ceramic and certain chemicals, such as calcium carbide and titanium dioxide) have limited potential for mitigation over the short term. An additional tax-free allowance of 10% for process emissions.

Allowance in respect of fugitive emissions

An additional tax-free allowance of 10% for fugitive emissions.

A tax-free allowance has been included for those entities that have proactively implemented GHG mitigation measures. This will be calculated with reference to the agreed GHG emissions intensity benchmark (including both direct and indirect emissions) for the sector or sub-sector. A maximum tax-free allowance of 5% is allowed for above average performance. GHG emissions intensity benchmarks for different industrial sectors or sub-sectors will be specified in a regulation to be released during 2018. This regulation will be developed based on inputs received from the different industry associations or companies.

Carbon offsets are proposed to provide entities with additional flexibility to reduce their GHG emissions and therefore reduce their tax liability. Carbon offsets can be used by firms to reduce their carbon tax liability by a maximum of 10% of their combustion emissions and 5% of their total fugitive emissions or 5% of their total process emissions.  The Draft Regulation on the Carbon Offset has been revised to allow for certain types of renewable energy projects including some projects under REIPPPP, and small and medium scale renewable energy projects. A revised Carbon Offset Regulation will be published for public consultation during 2018. 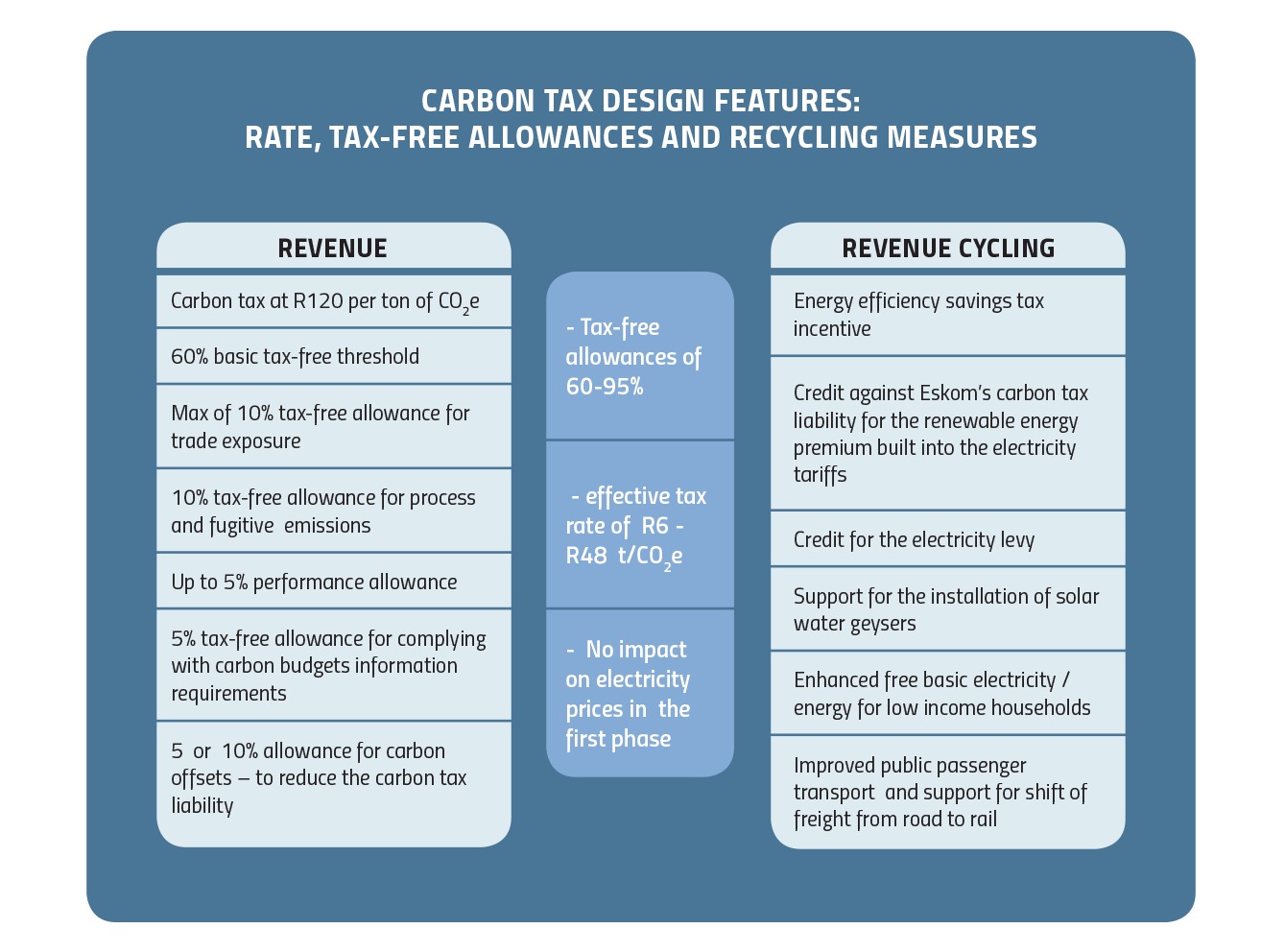 Over time, these percentage based tax free allowances could be replaced with an absolute tax-free threshold which could be in line with the proposed carbon budgets. Government has indicated that the mandatory carbon budgets regime post 2020 will be introduced in a way that is fully-aligned with the carbon tax.

The carbon tax liability is calculated as the tax base (total quantity of GHG emissions from combustion, fugitive and industrial processes proportionately reduced by tax free allowances, multiplied by the rate of the carbon tax. The carbon tax covers GHG emissions according to the Intergovernmental Panel on Climate Change guidelines which includes carbon dioxide, methane, nitrous oxide, perfluoro-carbons, hydrofluoro-carbons and sulphur hexafluoride.

The carbon tax applies to all the sectors and activities except the Agriculture Forestry and Other Land Use (AFOLU) and waste sectors, which will be exempt during the first implementation phase (up to 2022), due to measurement difficulties. The activities in the AFOLU and waste sectors qualify for 100% allowance and therefore a zero rate of tax.

However, National Treasury has responded positively to SASA’s appeal that carbon emissions from biomass should not be taxed, therefore the remaining inclusion of emissions from methane and nitrous oxide for biomass results in a reduced tax exposure. A remaining challenge though is the alignment very much needed between the South African National Atmospheric Emissions Inventory System and the Draft Carbon Tax reporting.