The Sugar No 11 March 2018 contract oscillated from top to bottom and back in the month of December 2017, only to lose all ground gained and test new lows in the first weeks of 2018.  Taking a slightly longer view, pricing has been range bound for 6 months (13.00 to 15.50 USc/lb). At the start of December 2017, the fundamental picture was bearish, and with prices falling from 14.98 USc/lb (1 December 2017) to 13.66 USc/lb (15 December 2017), following speculator selling.  The rally leading into the festive period was attributed to a combination of  rising oil prices, a weaker US dollar, speculator short covering activity, and buying from China at the month’s low price point.  The rally was capped as producers started selling above the 15.00 USc/lb mark.  It is considered by some analysts that producers remain underpriced.

The white premium rose somewhat in December, from the year’s low of USD 53.72 per ton, to recover to the highest point since September 2017, USD 65.99 per ton.  The premium is currently in the region of USD 63 per ton.

Speculators held net short positions of 109 079 lots by mid-December, with short covering and new longs reducing this position to 42 805 lots short by December month end.  Roughly 60 000 lots bought were considered to be pre-emptive buying ahead of the Index funds reweighting in early January 2018.  Since then, speculator selling has once again driven No 11 pricing lower to current levels (13.17 USc/lb on 23 January 2018). 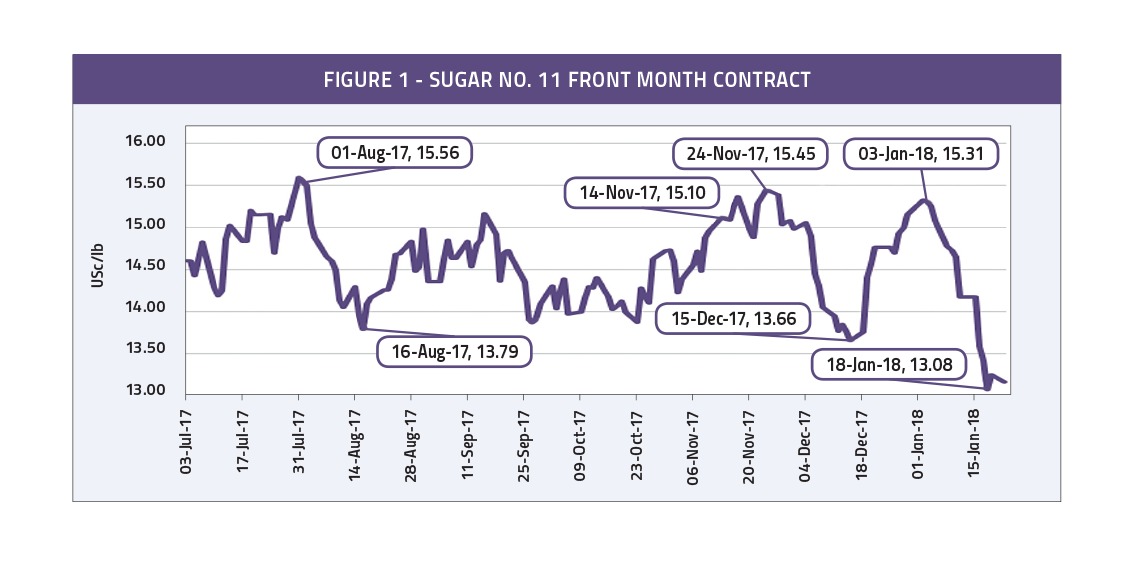 On a April/March crop basis, Centre South Brazilian sugar production latest estimates as the season closes are 36.14 million tons sugar (compared with 35.63 tons in the prior year), 25.30 billion litres ethanol (verus 25.65 billion litres in 2016/2017), and a sugar mix of 46.75% against 46.29% the prior year.  Cane crushed was lower in the season (by approximately 13 million tons), but total recoverable sugar (ATR) is estimated to be up from 133 kg/ton cane to 136.6 kg per ton of cane in the current season. Ethanol continues to pay more than sugar, as it has done since August 2017, with parity in early January 2018 estimated at 17.71 USc/lb for hydrous ethanol, and 17.83 USc/lb for anhydrous ethanol (in No 11 equivalent terms) by Wilmar analysts.  The later than anticipated switch to ethanol production may have been due to export sugar contracts that had to be honoured.  Ethanol pricing has been further bolstered by an increase in duties on imported ethanol above a quota of 600 000 cu m per year, incentivising local production.  Gasoline prices in Brazil rose by 6.6 % in December, following a 4.5% increase in November 2017, and ethanol prices followed the positive trajectory.

We reported recently on Brazil’s RenovaBio programme, aimed at boosting local biofuel consumption.  This was signed into law by President Michel Temer and gazetted on 27 December 2017.  The decarbonisation targets for Brazil must now be defined in the next 6 months, with regulations set to be implemented in early 2020.  Fuel distributors will be given individual targets for blending of renewable fuels, to effect the legislation.  While positive from a ethanol demand perspective into the future, the impact of the programme may not be felt in the international sugar market in the short term, given the overhand of sugar stock.

Indian production estimates remain bullish, up 26.5% year-on-year (5.4 million tons) to a total production of 26.5 million tons.  Much of the recovery is expected from Maharashtra province (3.8 million ton improvement year-on-year), where 180 mills operated between October and December 2017, versus 120 mills the prior year.  In December 2017, the Indian Government removed local trader stock holding limits, introduced in 2016,  on the back of rising domestic production and falling local prices.  Indian consumption is expected to grow by 2% in 2017/2018 to 25 million tons.

Thai sugar production continues to outstrip the previous season, and is expected to end 15.1% up at 11.6 million tons.  Thai exports have been somewhat curtailed by EU exports, and concessionary import duties for Australia into Indonesia, which puts Australian raws on par with Thai sugar. Indonesia is Thailand’s primary raws export destination.  Indonesia is expected to continue to import approximately 4.4 million tons of raws, flat on the prior year.

European Union local prices have been in a free fall since July 2017, and are currently estimated to be in the region of EUR 375 – 380 per ton (USD 460 – 466 per ton) on a duty paid delivered basis.  Sellers in this market are reportedly battling to cope with growing stocks and diminishing storage capacity, with high yield expectations looming in the coming season.

The looming surplus in sugar supply globally has resulted in higher pricing for further out contracts, paying producers to carry sugar.  The October 2018 contract currently pays 13.92 USc/lb, with March 2019 at 14.64 USc/lb, against the front month March 2018 at 13.17 USc/lb.  The expectations of global surplus stocks continue to weigh on the market from a fundamental perspective, with Kingsman reducing their estimated deficit for the 2015/2016 season, and increasing the surplus for the 2017/2018 season by 90 000 tons to 3. 54 tons.  The 2018/2019 surplus expectation remains unchanged at 7.44 million tons.

Judith is the Commercial Director at SASA