The National Science and Technology Forum (NSTF) Awards recognise the significant and outstanding contribution made to science, engineering and technology (SET) and innovation in South Africa. 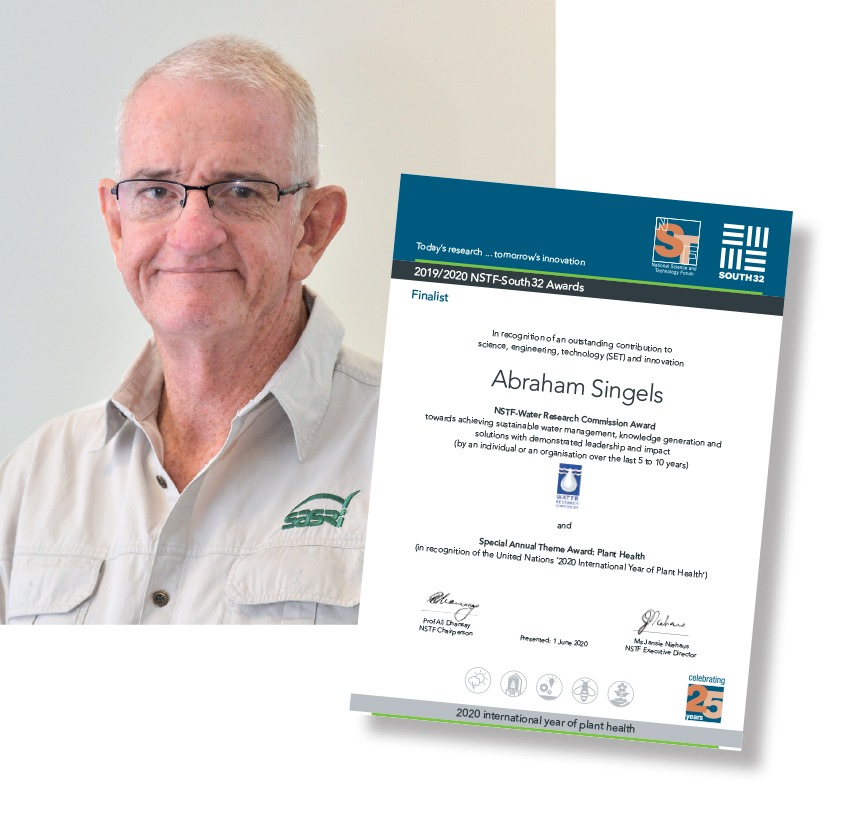 Over the past ten years at SASRI, Dr Singels has strengthened the Institute’s reputation as an international leader in sugarcane crop simulation modelling and focused this significant capacity on the development and application of mathematical models and computer tools to crop management issues relating to water.  He has provided leadership and strategic direction to teams of SASRI scientists, as well as to international collaborators from Australia, Brazil, France and the USA. He was a founding member of the International Consortium for Sugarcane Modelling and led the consortium’s first project to examine sugarcane genetic-by-environment interactions in a set of identical cultivar trials conducted at four locations around the globe. The knowledge from the study is being used to optimise the role of sugarcane crops models in informing cultivar development and management.

After a lengthy and highly rigorous adjudication process by an independent adjudication panel, the Water Research Commission Award went to Professor Faizal Bux – Director and Professor: Institute for Water and Wastewater Technology; and Chair: DSI/NRF SARChI: Wastewater Treatment, Durban University of Technology for researching wastewater as a resource and not a burden to society.

The Special Annual Theme Award went to Professor Michael Wingfield – Professor: Forestry and Agricultural Biotechnology Institute; and Adviser to the Executive, University of Pretoria for being globally recognised as a SA plant pathologist for a lifetime of contributions to the identification and management of plant diseases, as well as the education and mentorship of large numbers of plant pathologists and entomologists globally.

Even though Dr Singels was not successful, he is highly recognised for his substantial contribution to the sugar industry and to science, technology and innovation in South Africa.