“REVOLUTIONISING THE SUGAR INDUSTRY” IN A BIG WAY

Agri-processing giant Tongaat Hulett has embarked on a mission to advance transformation significantly in the sugar industry. 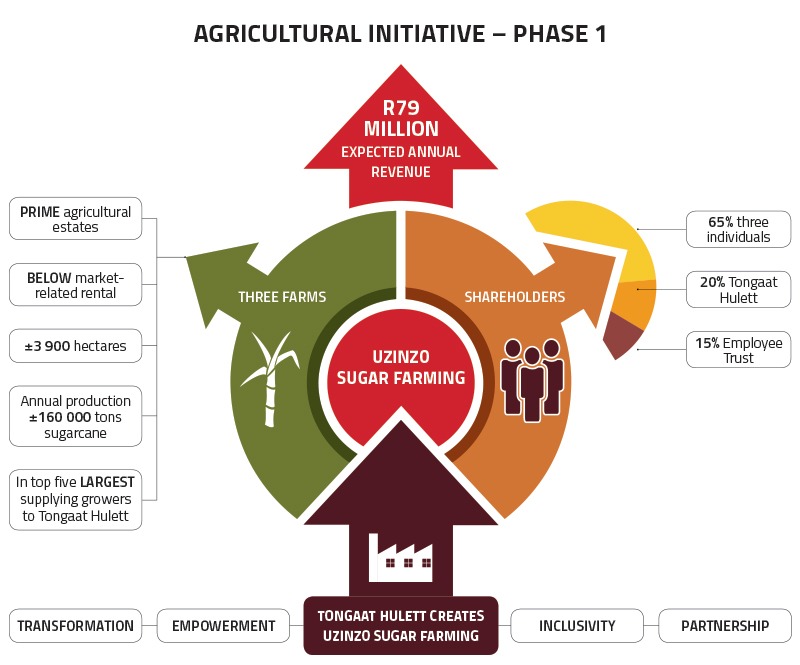 Phase 1 of the agricultural initiative is set to meet the Agri-BEE scorecard objectives including equity and ownership profiles, through the creation of a large-scale black-owned sugarcane farming enterprise. The initiative will also reduce the impact of retrenchment through employee empowerment; focus only on the estates that have the highest agronomic potential; and maintain full economies of size and scale of estates. In addition, transformative agriculture is set to encourage youth participation and ensure meaningful participation of black farmers within the sugar industry.

To make the transformation initiative a reality, Tongaat Hulett facilitated the creation of Uzinzo Sugar Farming, which means stability in isiZulu. Uzinzo will enable shareholders to lease three prime agricultural estates at below market-related rental. The leased area is approximately 3 900 hectares with an estimated annual production of 160 000 tons of sugarcane, making Uzinzo Sugar Farming one of Tongaat Hulett’s top five largest supplying growers.

The three farms extend over both coastal and the Midlands regions, mitigating climate risks. They also grow different variants of cane, some of which are harvested annually and other crops every second year. Farming will also include food crops.

Uzinzo’s annual revenue is expected to be around R79 million, which together with its scale of production, will make it the first broad-based agricultural company to feature amongst the largest ten sugarcane farmers in KwaZulu-Natal.

Three dynamic individuals, Nonhlanhla Gumede (33), Khetha Ncalane (45) and Khumbulani Mthethwa (44) have been selected to be at the helm of Uzinzo Sugar Farming. These individuals have a 65% shareholding. There is also a 15% shareholding for the employees through an Employee Trust that has been created. Tongaat Hulett, which will retain a 20% shareholding, will play a facilitative and mentorship role in the short-term while the shareholders familiarise themselves with the various intricacies of this sugar farming business.

In addition to the agricultural initiative, Tongaat Hulett has met with the growers and the grower leadership and launched another transformative initiative in the milling, refining and sugar marketing business. “The milling, refining and sugar marketing business will be implemented on a scale that has never been achieved in the sugar industry,” said Tongaat Hulett CEO Gavin Hudson. “For many years, growers have called for equity participation in the milling and refining business which would allow for their increased participation in the sugar industry value chain. The initiative is providing this opportunity, which is revolutionary for the industry.” It is envisaged that the transaction will be completed by December 2019 and Hudson concluded that this transaction will allow the company to further embed its objectives of transformation, empowerment, inclusivity and partnership.

Grower representatives welcomed the initiative, particularly its inclusivity and they have requested that Tongaat Hulett assist them in identifying potential funders and ensure that women and youth are prioritised in the process. “This is a great initiative that promotes empowerment and transformation in the milling sector. It will afford growers the opportunity to participate in the full sugarcane agriculture value chain. Growers will engage further with Tongaat Hulett to explore the detail of the concept,” noted Dave Littley, Amatikulu Local Grower Council Chairman.

“A key focus area for the South African Farmers Development Association (SAFDA) is to ensure full value chain participation of black farmers. We believe any opportunity that aligns with this must unlock value creation for our farmers and contribute to the sustainability of the industry at large – particularly at this time when the industry is facing a number of challenges,” said Lee Hlubi, Deputy Chairperson of SAFDA.