The March 2020 contract experienced a surge in value after the October 2019 contract came off the board. The March 2020 contracted closed at 12.89 US c/lb on 2 October 2019. This represented the highest levels posted by the contract since 9 August 2019, when the contract closed at 12.95 USc/lb. The appreciation in value had little to do with the low delivery to the October expiry as the market was once again boosted by speculator short covering. 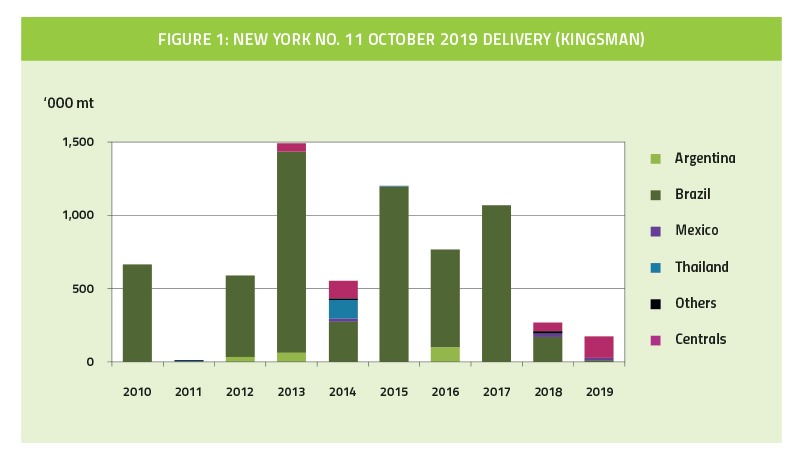 As the latest saying in the market goes, “What the Specs give, they can effortlessly take away”, was never more evident in the weeks that followed. The March 2020 contract lost significant value closing at 12.18 US c/lb on 22 October 2019. During this period the speculators increased their short position to approximately 202 949 lots.

On the macroeconomic front, the Brazilian Real (BRL) gained momentum against the US Dollar in early November, strengthening to levels below 4.00 BRL/USD. This was the first time since early August 2019 that the BRL traded below this threshold for consecutive trading days. This supportive picture was quickly erased as the BRL weakened to 4.15 BRL/USD on 11 November 2019. Brent Crude prices also firmed during the first seven trading days of November averaging 62.28 USD per barrel. This represented a 2.65 USD per barrel increase in value when compared to average prices posted in October.

The higher than expected Brazilian production in October 2019 has added to their export availability in Q4 of 2019 and Q1 of 2020. While increased production from Brazil is never welcomed in an ‘over-supplied’ market, demand for Brazil sugar has gained some momentum in the past month. Offtake of Brazil raws reached 2.1 mmt in October 2019, which represented the highest figure since September 2018. According to LMC, the main reason for the surge in demand can be attributed to the refining sector. Brazilian VHP has been sold at a discount to the No 11 price, which has created attractive refining margins for the refiners. According to LMC, 300 000 tons of demand has come from India, with a similar amount imported from Bangladesh. Both these origins would be expected to import Indian raw sugar given the current state of play in the Indian market.

The start of September 2019 saw the announcement of India’s export policy for the 2019/2020 season. The Indian government has approved a lump sum export subsidy of approximately USD 146 per ton to sugar mills for the 2019/2020 season. The subsidy allows for 6mmt of raw and white sugar exports. According to LMC, approximately 1.1 mmt of the 2019/2020 season sugar has been contracted so far. 700 000 tons has been contracted as raws to Iran with the remainder contracted as whites. Whites were sold at USD 310-330 per ton FOB while raw sales to Iran were likely to be in the region of USD 320- 330 per ton on an FOB basis. 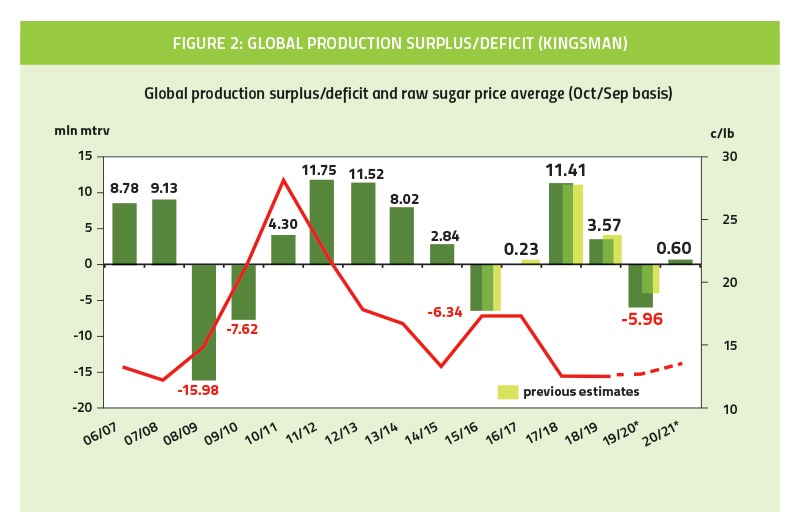 Much of the trade believe that the 2019/2020 season will remain a deficit year of production, on the back of a low sugar mix in Brazil and lower production in India and Thailand. The market has also seen notable reductions in the production estimates for Australia, the EU and the NAFTA region. Russia is the only region expected to produce a higher 2019/2020 crop, with the market expecting an 800 000 ton increase in production.

While the market anticipates a deficit year of production for the 2019/2020 season, the trade is still struggling to reach consensus on how the massive global stock levels will be dealt with in the coming months. The global stocks-to-use ratio is expected to remain in excess of 50% for the 2020/2021 season. This equates to above six months of consumption over the next 2 years. Adding complexity to the equation is that global consumption is expected to be flat or declining. General market views are that consumption estimations globally may be overstated. The impact of negative health perceptions are pervading all markets, even those considered to have the greatest potential into the future (Africa, China). Mexico has recently implemented tough product labelling legislation, which is seen as a major cause of the rapid decline in consumption in this country.

In addition to the massive stock levels, the market will also have to wrestle with a highly volatile energy market, fluctuations in the Brazilian Real and most importantly, the unpredictability of the speculators. The latest Commitment of Traders report showed a reduction of the speculators net short position from 195 000 lots to 171 000 tons. The most interesting point highlighted in this report was that the reduction has come from fresh longs and not from short covering. On the London exchange, the speculators started a buying spree in early September which has continued consistently resulting in the speculators holding a net long positions of 9 284 lots. According to Kingsman, the London market often takes the lead anticipating big moves, as such, the possibility of a new long trend in the No 11 market should not be disregarded. With the speculators in buying mode, current market conditions point to more upside potential than downside risk in the short-term. Most research and trade houses believe that the market will trade between 12.00 US c/lb and 14.00 US c/lb range in the medium-term.

Geran Ranganthan is the Export Administration Manager at SASA